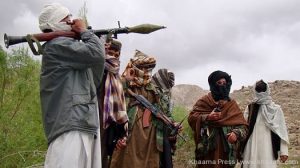 The Taliban militants have ambushed senior government officials including the provincial governor in northeastern Badakhshan province.

The incident took place in Jurm district and the provincial intelligence chief, governor spokesman and police chief are also among those trapped in the area.

A local police official said additional forces have been deployed to end the Taliban siege and free the trapped officials.

Provincial governor spokesman, Ahmad Nawid Frotan, said Taliban militants ambushed the vehicles of provincial governor, security chief and NDS chief while they were visiting a military base in Jurm district.

Frotan further added that the local government officials escaped the attack unhurt and three Afghan intelligence operatives were injured during the clashes.

He said the Taliban militants have also suffered casualties during the clashes.