Taliban ambush Afghan and US troops convoy in Nangarhar 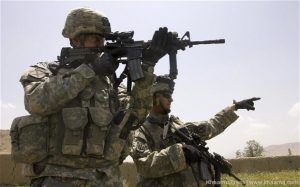 At least five Taliban militants were killed and three others were injured following clashes with the Afghan and coalition security forces in eastern Nangarhar province of Afghanistan.

According to local government officials, the incident took place Friday afternoon in Spinghar district after a group of Taliban militants ambushed a convoy of the Afghan and US special forces.

Provincial governor spokesman, Ahmad Zia Abdulzai also confirmed the report and said five Taliban militants were killed and three others were injured during the clashes which continued until 8 pm local time.