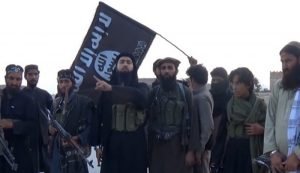 Two Tajikistan nationals were arrested before they manage to join the Islamic State of Iraq and Syria (ISIS) loyalists in eastern Nangarhar province of Afghanistan.

According to a statement by NDS, the two men have been identified as Ehsanullah and Asim who were accompanied by two othe individuals identified as Rahmullah and Hussain hailing originally from the Parwan province of Afghanistan.

NDS further added that the men were looking to join the loyalists of the Islamic State of Iraq and Syria (ISIS) terrorist group in Syria.

This comes as the Ministry of Defense (MoD) earlier said Chechens, Punjabis, Arabs, Uzbeks, Uyghur and other foreign terrorists are actively participating in the war in Afghanistan and are continuously killing innocent Afghan civilians.

MoD said the regional intelligence agencies and terrorist groups are imposing on the Afghan nation and have a critical role in the ongoing violence in the country.

According to MoD, the terrorists are deployed to Afghanistan with full financial and military support under the name of holy war.