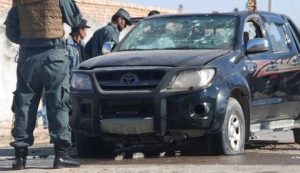 A Tajik diplomat was injured following an attack by unknown gunmen in northern Kunduz province of Afghanistan on Friday, local officials said.

The officials further added that the incident took place after a group of armed militants ambushed the vehicle of the diplomat while he was on his way to Kunduz province from northeastern Badakhshan province.

He said the injured diplomat was recognized as Mahboob who was working in Tajikistan’s consulate in northeastern Badakhshan province of Afghanistan.

The official did not disclose further information regarding the health condition of the injured diplomat; however he said no one else was injured following the attack.

Kunduz is among the relatively volatile provinces in northern Afghanistan where anti-government armed militant groups including the Taliban militants are actively operating in a number of its districts and frequently carry out insurgency activities.