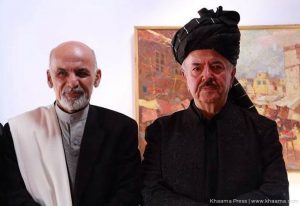 Hundreds of supporters of Alhaj Syed Mansoor Naderi and Syed Shah Nasir Naderi participated in the gathering which was organized by National Unity Party of Afghanistan (NUPA) and the People’s Council of Afghan Ismailis.

NUPA following a statement announced Thursday that the gathering, organized in Loya Jirga camp, was also attended by political allies of Syed Mansoor Naderi and various other political and influential figures.

Naderi announced his support to Dr. Ashraf Ghani Ahmadzai and his team in the upcoming presidential elections.

The statement releaed by NUPA also added that the Ismailies of Afghanistan will continue to support the supporters of democracy and movements which is in the national interest of the country.

Naderi is an influential political and religious leader who is having a significant influence and role in the political situation and affairs of the country.

He was one of the main supporters of president Hamid Karzai during 2009 presidential elections.

The presidential and provincial elections of Afghanistan is scheduled to be organized earlier in April this year.