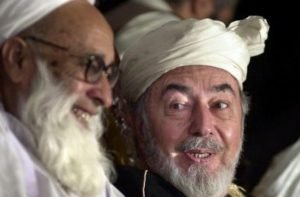 An influential political and religious figure Pir Syed Ahmad Gilani has been appointed as the new Chief of the Afghan High Peace Council.

The former Afghan Vice President Karim Khalili has been appointed as the Deputy Chief of the High Peace Council along with Mawlavi Ata-ur-Rehman, Mawlavi Khaibar and Habiba Surabi.

The new appointments comes days after the major international donors suspended aid to the council due to the lack of the leadership.

The council officials said earlier this month that the major donors that have suspended financial aid included the United States Agency for International Development and the government of the United Kingdom.

A senior member of the council, Mohammad Ismail Qasimyar, confirmed that the donors have suspended financial support to the High Peace Council since the beginning of the year, citing lack of chairman for almost a year and issues within the secretariat of the council.

The current Minister of Foreign Affairs Salahuddin Rabbani was previously serving as the chairman of the council while the acting Minister of Defense Masoom Stanikzai was the secretariat chief.

The Afghanistan High Peace Council was formed by the former President Hamid Karzai in mid 2010 to provide a platform for reconciliation talks between the Afghan government and the Taliban group.