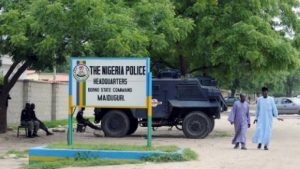 22 people have been killed in twin suicide bombings at a Nigerian mosque, officials and residents said on Wednesday.

Officials said the suicide bombers went to the mosque during the morning prayers on the outskirts of the restive Nigerian city of Maiduguri—the birthplace of Boko Haram which the US military believes is the most violent terrorist group in the world.

Borno State Emergency Management Agency said one of the two female suicide bombers detonated her explosives inside the mosque as worshippers had gathered for the prayers and another one targeted those fleeing the mosque after the first explosion.

“One of them went in and joined the first row of the congregation and when the worshippers stood up for the prayers she detonated her explosives, killing several worshippers” Abdullahi Omar, the agency’s spokesperson said.

“While the others were trying to flee, the second woman who stood outside the mosque rushed in and set off her explosives in their midst.”

17 other worshipers have sustained injuries in the attack.

Although, it is yet not clear who comprise most of the victims but the mosque is said to be the command center the country’s war against Boko Haram.