Supporters of Abdullah kill 2 backers of Ghani in Jalalabad 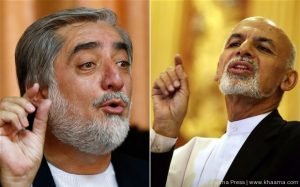 According to reports, at least two people were shot dead by Dr. Abdullah Abdullah’s supporters in eastern Jalalabad city on Saturday.

The incident reportedly took place after a number of Abdullah’s supporters opened fire on Ashraf Ghani’s supporters who were chanting in his support.

A local security official also confirmed the incident and said dozens of people gathered near the house of an Afghan lawmaker whose guards were accused of the shooting spree.

In the meantime, an official from Ghani’s electoral team confirmed the incident and said at least three people were injured following the attack.

However, a local health official said two people who were injured in the attack died of their wounds while the their person was under medical care.