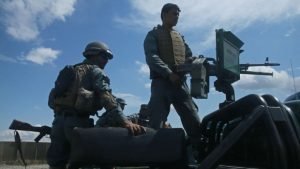 At least six people including five suicide bombers were killed after a group of suicide bombers launched coordinated attack on provincial police headquarter in Kunduz province of Afghanistan.

He said two of the suicide bombers were shot dead while one of them detonated a vehicle packed with explosives, leaving a policeman injured.

In the meantime, Gen. Ayub Salangi, Senior deputy interior minister for security affairs, said the attack was carried out by a group of five suicide bombers.

Gen. Salangi said two of the suicide bombers were shot dead while three others detonated their explosives, leaving one person dead and three others injured.

The Taliban militants group claimed responsibility behind the incident.