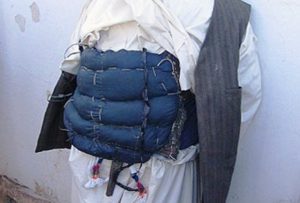 A statement by the 201st Silab Corps said the suicide bomber identified as Ahmad son of Feroz surrendered to security forces in Nangarhar province on Sunday.

The statement further added that Ahmad is originally a resident of Syed Karam district of Paktia province and he surrendered to the security forces and handed over his explosives laden vest to the security personnel.

This comes as the local officials in Nangarhar province said earlier that the suicide bomber was arrested before he manage to carry out an attack on the provincial police commandment.

The provincial governor spokesman Ataullah Khogyani said a suicide bomber who was willing to carry out an attack on police commandment was arrested by the security forces from Jandarma bridge located close to the police commandment compound.

Khogyani further added that the suicide bomber is in the custody of the counter-terrorism operatives and an investigation is underway from the detained bomber.