Suicide bomber killed by own explosives before reaching to his target 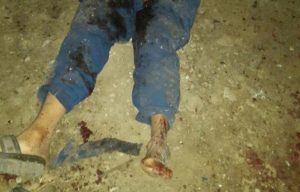 A suicide bomber was killed in an explosion triggered by his own explosives and before reaching to his target in eastern Nangrhar province of Afghanistan.

The provincial government in a statement said the incident took place late on Wednesday evening in the vicinity of Jalalabad city, the provincial capital of Nangarhar.

The statement further added that the suicide bomber’s explosives went off in the 6th police district of the city, leaving himself dead along with another individual.

The suicide bomber was being chased by the security forces to be arrested based on the tip off received by Nangarhar police, the statement said.

According to the governor’s office, the other individual killed in the explosion has been identified as Maghfoor.

The statement also added that the suicide bomber has been identified as Raifullah who was originally a resident of Pacher Agam district.

The anti-government armed militant groups including the Taliban and ISIS insurgents have not commented regarding the incident so far.