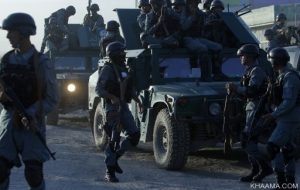 A suicide bomber targeted the Logar police headquarter in central Afghanistan on Monday at least nine policemen dead and three others injured.

According to reports, the suicide bomber had disguised himself in police uniform and detonated his vest near the police headquarter.

The Taliban militants group in Afghanistan claimed responsibility behind the incident.