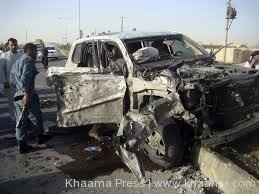 According to reports the incident took place after a suicide bomber detonated his explosives near the Helmand Radio Television located in Malalai Park while the convoy of provincial security chief was crossing the area.

Provincial governor spokesman Omar Zwak said at least four security guards of the security chief Gen. Mohammad Hakim Andar were injured, and the health condition of one of them is critical.

He said the incident took place after a suicide bomber rammed a vehicle laden with explosives into the convoy of Gen. Mohammad Hakim Andar.

According to Mr. Zwak at least two civilians were also injured following the explosion.