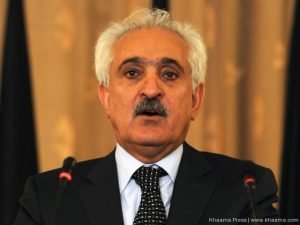 Spanta said he is still doubtful regarding Pakistan’s sincere cooperation in fight against terrorism, despite he called his recent trip to Pakistan satisfactory.

He said the recent clashes in Helmand and attack on Kunar is an obvious violation by Pakistan.

Spanta added that the issue was shared during his recent visit to Islamabad and serious talks were held in this regard with the Pakistani officials.

He said Pakistani militia forces have been seen in Helmand clashes and other parts of the country where major attacks have taken place against the Afghan forces.

Spanta visited Islamabad along with a delegation of high level government officials last week to hold talks regarding cross-border shelling in Kunar and other issues.

His visit to Pakistan was followed shortly after the Pakistani military launched a major offensive against the militant groups across the Durand Line.

The Pakistani military said all militant groups including the Haqqani terrorist network will be tageted durig the offensive.

However, Spanta said the announcement by Pakistani officials for targeting Haqqani militants is a good development theory wise.

He added that it will become clear later if Pakistan will honestly take practical actions in this regard or not.