Some 70 ISIS militants from Iraq, Syria forming the group’s branch in Afghanistan 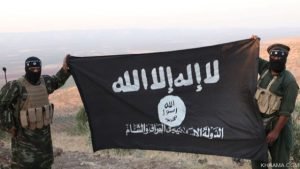 Around 70 militants of the Islamic State of Iraq and Syria (ISIS) terrorist group are busy in forming the core of the group’s branch in Afghanistan, it has been reported.

According to a UN report the terror group is making inroads in Afghanistan with the number of sympathizers and followers growing across the country.

The report further added that the group is recruiting followers in at least 25 provinces of Afghanistan with 10 percent of the sympathizers belonging to the Taliban group.

“The number of groups and individuals who are openly declaring either loyalty to or sympathy with ISIL continues to grow in a number of provinces in Afghanistan,” the report said.

Quoting the Afghan government sources, the report said “sightings of the groups with some form of ISIL branding” or sympathy were reported in 25 provinces in the war-torn country.”

According to the report the ISIS loyalists and the Taliban militants are fighting each other only in eastern Nangarhar province, citing the drug trade as the main reason behind the brutal clashes.

Abdul Rauf Khade, the former Taliban adviser to Mullah Mohammad Omar, has been described as one of the prominent ISIS fighters who formed his own group in southern Helmand and western Farah provinces after visiting Iraq in 2014.

The report also added that militants from Pakistan and Uzbekistan with some of them having close ties to al-Qaeda terrorist network have come under the IS banner after fleeing their country and have “rebranded themselves” in recent months.