Six of an Afghan family shot dead in Pesahwar of Pakistan 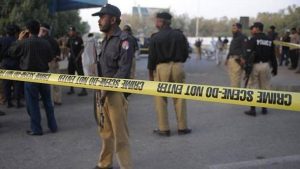 Gunmen have shot dead six members of an Afghan family in the outskirts of Peshawar city, the provincial capital of Khyber Pakhtunwa province of Pakistan, it has been reported.

The incident has reportedly taken place late on Monday evening, apparently involving a brawl among an Afghan and a Pakistani family.

“An exchange of fire took place between two rival groups. One was led by Bashir and another by Abdul Ghaffar. Resultantly, Bashir group killed six members from the family of Abdul Ghafar and also shot dead own one person to cross the case,” Shaukat Khan, the superintendent of Saddar Police, quoted by The News said.

“Two pistols, one Kalakov, and one Kalashnikov rifles have been recovered. Two accused have been arrested while efforts are being made to arrest the remaining ones,” Shaukat Khan added.

The officials also added that two other family members of the Afghan family were also wounded during the clash.

Another official says the clash between the two families took place after the Afghan side rejected a marriage proposal by the Pakistani family.