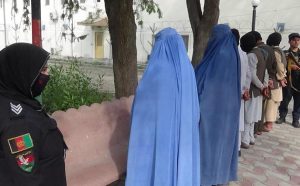 At least six kidnappers including two women were arrested by the Afghan security forces in Jalalabad city, the provincial capital of eastern Nangarhar province.

According to the local security officials, the security forces arrested the gang during an operation which also led to the release of a 4-year-old who was kept as hostage.

Provincial police spokesman Hazrat Hussain Mashriqwal told reporters, the gang had kidnapped the 4-year-old girl from the vicinity of the 2nd police district of Jalalabad.

Mashriqwal further added that the child was kidnapped from Fatima Al-Zahra hospital located in the 2nd police district of the city.

According to Mashriqwal, the child belonged to a doctor who was lured by the two women and was then taken to Surkh Rod area by the four men.

He said the child has been returned to her family safely and the six individuals icluding two women are currently in the custody of police.

This comes as the Afghan intelligence operatives had also rescued a 8-month-old baby from the custody of a group of three kidnappers on Sunday.

According to the local officials, at least three people including a woman were also arrested in connection to the kidnapping of the child.