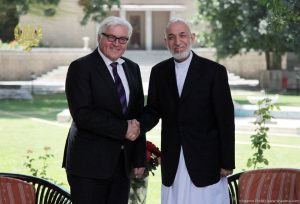 Afghan President Hamid Karzai has said that the situation in Afghanistan is intolerable and called on presidential candidates to reach an agreement as soon as possible.

President Karzai said the two candidates should immediately an agreement to form a national unity government where one of the candidates should become the president and the other candidate should take the position of chief executive.

Steinmeier is expected to hold talks with the two presidential candidates and the UN special envoy Jan Kubis during his visit to Afghanistan.

He called on Dr. Abdullah Abdullah and Dr. Ashraf Ghani Ahmadzai to reach an agreement regarding the unity government formation and use the historic opportunity in favor of a peaceful political transition.

In the meantime, President Karzai said there will be no need for opposition once the two presidential candidates agree to form a unity government.

Karzai said a decision regarding the national unity government should be taken as soon as possible and insisted that the candidates are fully supported in this regard.

The remarks by President Karzai comes as the two presidential contenders have not reached to an agreement regarding the formation of a national unity government and authorities of the chief executive.

The Independent Election Commission (IEC) officials have said they are close to announce the final vote results as the audit process was fully completed on Thursday evening. However, Abdul Rab Rassoul Sayyaf, a former presidential contender warned Saturday that disclosure of final results in the absence of an agreement would take the country towards an unresolveable crisis and instability.