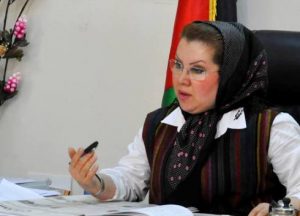 Deputy Information and Culture Minister Simeen Hasanzada has been dismissed for publicly endorsing the brutal murder of Farkhunda over false allegation of Quran burning.

The 27-year-old Farkhunda was brutally beaten, murdered and her body was set on fire by angry mob after she was accused of burning Quran.

At least 47 people including the custodian and the servant of the shrine have been arrested by police after investigations revealed the accusations were false and no proof was found to prove the holy Quran was torched.

An Afghan cleric Maulavi Ayaz Niazi also put himself into a trouble for publicly endorsing the brutal murder Farkhunda.

Niazi endorsed the lynching while speaking among the participants of Friday prayers and a day after Farkhunda was murdered and set on fire by angry mob.