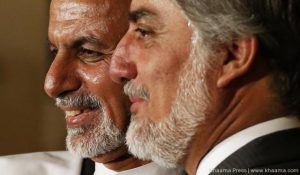 Dr. Ashraf Ghani Ahmadzai, the president-elect of Afghanistan and the chief executive officer Dr. Abdullah Abdullah have shared the key government institutions almost on equal basis among themselves.

Other key ministries and government institutions have also been equally shared among the two teams, according to the documents.

The two leaders signed an agreement on national unity government, putting an end to a controversial 5-month electoral process.

The agreement was reached following days of negotiation between on share of power, role of the chief executive officer and release of final vote results.

The share of power in national unity government is believed to be based on Bon agreement where the key ministries and government institutions were shared among ethnic groups that included 11 seats for Pashtuns, 8 seats for Tajiks, 5 seats for Hazras and the remaining seats were given to other minority ethnic groups.

However, the share of power in unity government is not based on ethnic groups but two electoral teams where each would appoint ministers and key government officials on equal basis.