Sharbat Gula to receive free of cost treatment in India 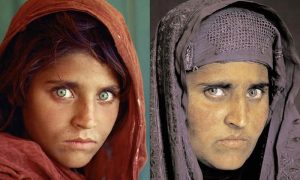 The iconic Afghan woman Sharbat Gula who arrived to Afghanistan last week, will receive medical treatment in India amid reports she is suffering from serious illness.

The Afghan Ambassador to India Dr. Shaida Abdali informed regarding her treatment in India today.

According to reports, Gula will receive free of cost treatment in Narayana hospital in Bangalore state of India.

“The Iconic Afghan Sharbat Gula will soon be in India for medical treatment free of cost – Thank you India for being a true friend!”Ambassador Abdali said in a Twitter post.

Gula gained global recognition when her photograph was featured on National Geographic Magazine’s cover in 1985 and was linked with Leonardo Da Vinci’s Mona.

She was residing together with her sons in Nasir Bagh camp established for Afghan refugees since she moved to Peshawar in 1984.

Gula arrived to Kabul on Wednesday days after she was detained by the authorities in Pakistan, allegedly for obtaining fake Pakistani national identity card.

President Mohammad Ashraf Ghani met her soon after she arrived in Kabul and handed over an apartment key in a bid to welcome her home after spending more than three decades in refuge.