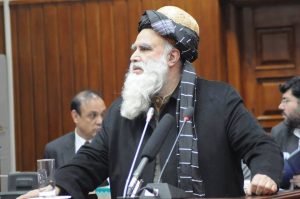 The militants fired several rockets on the residence of Abdul Rab Rasool Sayyaf earlier this evening in Paghman district of Kabul.

Sources close to Sayyaf have confirmed the incident but did not elaborate further on how many rockets were fired on his residence.

The sources confirmed that no there were no casualties in the attack, calling it a move by the terrorists and criminal gangs.

No group has so far claimed responsibility behind the attack which comes nearly eight the militants fired several rockets on Sayyaf’s residence.

Sayyaf is one of the most influential jihadi leaders and has been harshly criticizing the Taliban group for their insurgency activities.

Reaffirming his hard stance against the insurgent groups, Sayyaf called on militant groups last month to end slavery for the outsiders.

Sayyaf was speaking during a gathering to commemorate the 24th anniversary of Mujahideen’s victory against the former Soviet-backed regime.

Sayyaf said the militant and terrorist groups fighting in the country should not brand their insurgency as Jihad, insisting that killing of children, women, destroying houses and committing other horrific crimes are not a holy war.