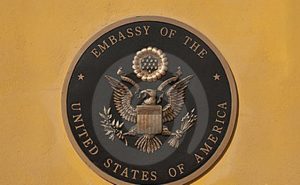 The US Embassy in Kabul has issued a security alert to citizens in capital Kabul following a series of deadly attacks in the main cities of the country, including capital Kabul that left scores of people dead or wounded.

“The U.S. Embassy in Kabul reminds U.S. citizens that serious threats to safety and security exist in the city of Kabul and throughout Afghanistan,” the US Embassy said in a statement.

According to the US Embassy, the potential also exists for protests to occur in Afghan cities on short notice.

This comes as the militant groups carried out a coordinated attack in West of Kabul city earlier this week, targeting the parliament staff in Dar-ul-Aman area.

At least 38 people were killed and nearly 100 others were wounded in the attack, according to the security and public health officials.

The Taliban group also released a video of the kidnapped professors of the American University in Afghanistan.

The video was released after the deadly attacks in Kabul, Kandahar, and Helmand provinces.

The two professors were abducted months ago from Kabul city and the video purportedly shows the two professors, hailing from US and Australian, making please to thee concerned officials for their lives.