Separate blasts kill or injure 9 civilians in Helmand and Farah 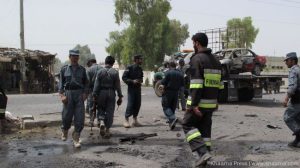 Local authorities in southern Helmand province of Afghanistan said one civilian was killed and three others were injured following an explosion in Nad-e-Ali district on Wednesday morning.

Provincial governor spokesman Omar Zwak said the incident took place after an explosive device went off near a private hospital.

In the meantime three Afghan civilians were killed and two others were injured following a roadside bomb explosion in Pusht-e-Rod ditrict of western Farah province.

Taliban militants group frequently use improvised explosive device as the weapon of their choice to target Afghan and coalition security forces which normally leads to civilian casualties.

The Taliban-led insurgency has been rampant since the group announced its summer offensive in April and vowed to carry out attacks across the country and will target, Afghan security forces, coalition forces, government officials and diploamtic institutions.