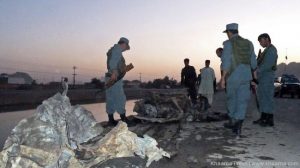 At least four civilians were killed or injured following separate blasts in southern Afghanistan on Thursday.

A kid was killed following a blast in Spin Boldak district of southern Kandahar province on Thursday afternoon.

Zia Durani, spokesman for the provincial security department confirming the report said, another civilian was also injured in the blast.

He said the blast took place around 12pm local time, however he did not disclose the nature of the incident.

In the meantime, two civilians were injured after a motorcycle packed with explosives went off in southern Helmand province of Afghanistan on Thursday.

No group including the Taliban militants has so far claimed responsibility behind the explosions.