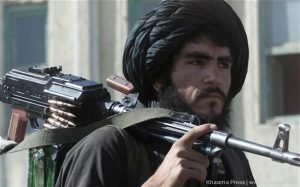 A senior Taliban leader was arrested during a joint military operation by Afghan and coalition security forces in northern Baghlan province of Afghanistan on Friday.

The senior leader oversees the operations of multiple insurgent cells in Baghlan-e Jadid district. He and his subordinates are responsible for numerous attacks against Afghan and coalition forces. He also collects illegal taxes from local civilians, facilitates the movement of weapons and military equipment for use in operations, and interfaces with senior insurgent leadership in order to pass operational information to his fighters.

The security force also seized one pistol as a result of the operation.”

ISAF further added, “An Afghan and Coalition security force arrested one insurgent and seized a weapons cache and a large quantity of narcotics during a cordon and search operation in Now Zad district, Helmand province, May 16. The cache consisted 2500 kilograms (5511 pounds) of wet and dry opium, two AK-47 Rifles and 19 AK-47 magazines. All seized Items were destroyed on location.”

“Afghan Provincial Response Company Helmand, advised by coalition forces, arrested nine insurgents during a cordon and search operation in Lashkar Gah district, Helmand province, May 16. The security force also seized an unknown quantity of ammunition as a result of the operation,” ISAF said.

Afghan Provincial Response Company Farah, enabled by coalition forces, arrested seven insurgents and seized a cache of weapons while conducting an arrest in Push-E Rod district, Farah Province, May 16, ISAF said adding that following the operation the Afghan and coalition security force recovered one PKM machine gun, over 100 rounds of ammunition and destroyed one RPG rocket. All detainees have been transferred to Afghan law enforcement officials for processing.