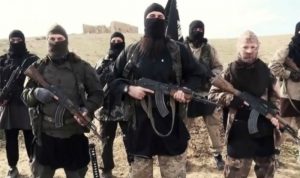 A senior leader of the loyalists of Islamic State of Iraq and Syria (ISIS) terrorist group was killed in an airstrike in eastern Nangarhar province of Afghanistan.

According to local government officials, the ISIS leader, identified as Shahid Omar, was killed in a drone strike conducted by the foreign forces in Afghanistan.

Provincial governor’s spokesman, Ataullah Khogyani, said Omar was in command of a group of at least 40 ISIS loyalists in this province.

Khogyani further added that the airstrike was carried out on Wednesday morning in the restive Achin district.

Nangarhar is among the relatively calm provinces in eastern Afghanistan but the anti-government armed militants have recently increased their insurgency activities in some remote districts of the province.

The loyalists of the ISIS terrorist group has also increased their presence in some remote districts, including Achin during the recent years although counter-terrorism operations continue by the Afghan and US forces to restrict their activities.