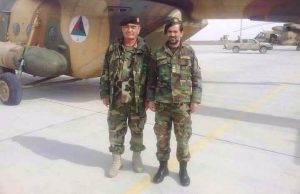 A senior commander of the Afghan National Army (ANA) was martyred in an explosion in southern Helmand province of Afghanistan, the officials said Tuesday.

Gen. Atamir Agah was serving with the 3rd Brigade of 215 Maiwand Corps of the Afghan National Army, Zwak said, adding that three soldiers were also wounded.

The district administrative chief Mohammad Sharif also confirmed that Gen. Atamir was martyred while he was on his way to Mosa Qala district when his vehicle struck an improvised explosive device.

However, another source speaking on the condition of anonymity, said Gen. Atamir lost his life along with 25 other soldiers after a group of militants launched an attack on an army camp in Greshk district.

The anti-government armed militant groups have not commented regarding the incident which comes amid deteriorating security situation across the country.

The Taliban militants launched a major offensive in a bid to take control of key districts including Sangin last month, forcing the US forces to interfere in support of the Afghan security forces.