Senate Chairman reacts at the demands of political figures regarding elections 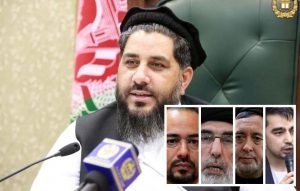 The Chairman of the Afghan Senate, Upper House of the Parliament, Fazal Hadi Muslimyar reacted at the demands of the political figures regarding the upcoming elections.

Speaking during the general session of the Upper House, Meshrano Jirga on Tuesday, Muslimyar said the individuals and political parties have the right to share their views but their demand for invalidation of the voters registration and computerization of the process is not logical.

Muslimyar further added that the political figures were supposed to share their demands earlier and it would be impossible to convince the international community as the elections date is getting close and doing so would not only the presidential elections but would have negative impact on the nation.

He said the political parties and figures should help the elections to be held in a transparent way by assisting the other observers.

The leader of Hezb-e-Islami Gulbuddin Hekmatyar, leader of Jamiat-e-Islami Salahuddin Rabbani, leader of Junbish Milli Batur Dostum, leader of Wahdat Islami Mohammad Mohaqiq, and the leader of Mahaz Milli Syed Hamid Gilani participated in the meeting on Saturday to discuss the upcoming elections.

Zerar Ahmad Muqbil had participated on behalf of the former President Hamid Karzai along with a member of the Front for Security and Stability of Afghanistan Mohammad Younus Qanooni.

The participants of the meeting called on the government and the independent election commissions to invalidate the process for the registration of voters for the upcoming elections, bring changes in the elections system of the country, use the biometric system for the registration of the voters, and give more share to the political parties in the elections.