Security convoy of US diplomats attacked in Herat province 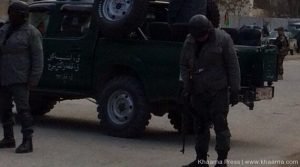 A group of militants attacked the security convoy of the US diplomats in western Herat province of Afghanistan.

The incident has reportedly taken place in Injil district after the militants ambushed the convoy with the rockets.

Injil district chief, Bashir Ahmad said the militants on a motorbike attacked the convoy with rocket-propelled grenade (RPG) and managed to flee the area.

Ahmad further added that the consulate security personnel were on their way to the airport when the incident took place.

He said at least two security personnel were injured following the attack.

The US embassy in Kabul confirmed the incident and said two Americans were slightly injured following the attack.