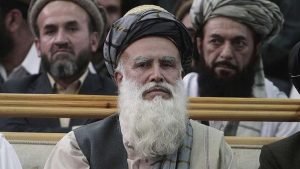 A former prominent Mujahideen leader Abdul Rab Rasool Sayyaf has called on militant groups to end slavery for the outsiders, reiterating his hard stance against the insurgent groups in the country.

Sayyaf was speaking during a gathering to commemorate the 24th anniversary of Mujahideen’s victory against the former Soviet-backed regime.

Sayyaf said the militant and terrorist groups fighting in the country should not brand their insurgency as Jihad, insisting that killing of children, women, destroying houses and committing other horrific crimes are not a holy war.

He urged the Taliban and other militant groups not to further destroy their homeland and refrain from slavery for the outsiders.

In parts of his speech, Sayyaf said the freedom and comfort which the neighboring countries are enjoy from are as a result of the Jihad of the Afghan people.

Sayyaf noted the growing objections and criticisms against the Mujahideen in the media, specifically in social media, and said offence and defaming of Mujahideen is an offensive on Islam and its principles.

He also called on the government to include the former Mujahideen in fight against terror and defense of the country.

This is not the first time Sayyaf has taken a hard stance against the militant groups in the country, specifically the Taliban group.

Sayyaf has publicly denounced the insurgency activities of the Taliban militants on numerous occasions and in one stance declared Jihad against the group.