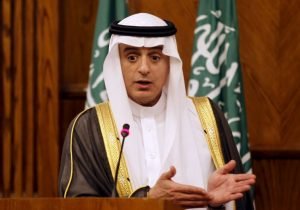 According to Saudi Press Agency (SPA), the kingdom is studying other options to include suing Iran at the United Nations.

“We are going to spare no effort to guarantee our rights, and the future steps of the Kingdom,” al-Jubeir quoted by SPA as saying, noting that “the objective is to protect the interests of the Kingdom, the Saudi people, its territories and provide support and assistance to the Kingdom’s ally countries so that they would not be harmed by Iranian negative practices.”

Yesterday, the kingdom gave an ultimatum of 24 hours to Iranian ambassador to leave the country.

Tension escalated between Saudi and Iran after the kingdom executed a Shiite Cleric Sheikh al-Nimr on terrorism charges among 47 others.

Following the execution, angry protesters set fire to Saudi embassy in Tehran and the country’s consulate in Mashad to show a strong reaction over the execution.

Crowds of protesters first stormed and ransacked Saudi’s embassy and Consulate, damaged property and then threw Molotov cocktail on both diplomatic offices to burn them.

“The execution of a personality such as Sheikh Nimr who had no means other than speech to pursue his political and religious objectives only shows the depth of imprudence and irresponsibility,” said Iran’s Foreign Ministry Spokesperson Hossein Jaberi Ansari. “The Saudi government supports terrorists and Takfiri extremists, while talking to its critics at home with the language of execution and suppression.”

“The unjustly spilt blood of this martyr will have quick consequences,” according to AFP, Khamenei told clerics in the capital. “This scholar neither encouraged people into armed action nor secretly conspired for plots but the only thing he did was utter public criticism rising from his religious zeal.”

Sheikh Nimr Baqr al-Nimr was arrested, jailed and later sentenced to death on terrorism charges for his fiery speeches during anti-government protests in Qatif, a city that saw massive street protests followed by a crackdown by the Saudi authorities in the wake of the Arab Spring.