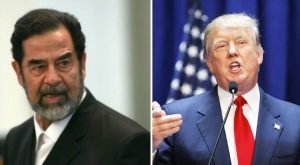 The US Presidential contender Donald Trump has said Saddam Hussein was ‘very good’ at killing terrorists, reiterating his opposition to the US invasion in Iraq in 2003.

Trump was speaking in Ohio ahead of hte primary elections in states in a private hangar at the city’s airfield where he was introduced to the crowd of around 1,500 by New Jersey Governor Chris Christieon.

He said the rise of the Islamic State of Iraq and Syria (ISIS) terrorist group in middle was as a result of the US invasion on Iraq which destabilized the region.

“Saddam Hussein was not a good person. Who cares,” Trump said, adding that “He was very good at killing terrorists. Now, Iraq is the Harvard for terrorism.”

“Iran is taking over Iraq. They’re taking over the second largest oil reserves in the world,” he was quoted as saying in a report by The Independent.

Trump further added “I said ‘take the oil’ and they said ‘you can’t do that – it’s a sovereign country’. Sovereign country? These were corrupt people.”

“Isis turned out to be a lot smarter than the people we backed,” he added.

The first British coins to feature the image of King Charles have been unveiled by the Royal Mint,...