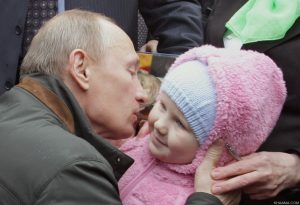 According to reports, a lawmaker in Rusia wants a bill that would allow distribution of Vladimir Putin’s sperm to Russian women en masse in a bid to create a new generation of ‘military and political elite’.

According to the Russian-language newspaper, Trust, the suggestion has been made by the Chairwoman Of Parliamentary Commission on Women’s affairs, Children and Family, Yelena Borisovna Mizoulina.

“The essence of my proposition is simple. Each female citizen of Russia will be able to receive by mail the genetic material of the President, get pregnant from him and have a baby. These mothers will be receiving special allowances from the government,” Mizoulina said.

The proposal was made in a routable discussion regarding the issue of fertility and Russia.

According to Mizoulina, the children would be educated in ‘special institutions that resemble Souvorov Schools’ – a type of boarding school in the former Soviet Union.

She said the aim would be that the child would be “devoted to the homeland and personally to the President of the Russian Fedaration.”

Mizoulina, holds a PhD in law and holds an office roughly equivalent to that of a US Representative, is associated with the Dima Yakovlev Law and other efforts to prevent Americans from adopting Russian children.

She is also known for odd proposals that express patriotism and concern for the continuation of the Russian nation, accordig to the New York Observer.