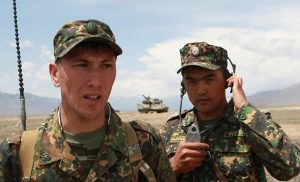 Russia has stepped up rearming the armed forces of Kyrgyzstan amid concerns that the deteriorating security situation in Afghanistan could affect the Central Asian countries.

According to Russian Defense Minister Sergei Shoigu the step by Moscow has been taken in a bid to counter the threats posed by the emergent Islamic State terror group in Afghanistan.

“From our side, we are doing everything possible in order to complete the plan for rearming the Kyrgyz Armed Forces so that they can counter threats that are coming [out of Afghanistan],” Shoigu quoted by the State-run RIA news agency said.

Russia is also having a military airbase in Kant near the Kyrgyz capital Bishkek.

The remarks by Shoigu comes as the security situation in Afghanistan has rapidly deteriorated during the recent months as the Taliban-led insurgency has been rampant.

There are also concerns that the loyalists of the Islamic State of Iraq and Syria (ISIS) terrorist group has stepped up efforts to further expand the group’s foothold in country.

In latest efforts to recruit more loyalists, the terror group launched an FM radio which can be heard in parts of eastern Nangarhar province, including the provincial capital city of Jalalabad.

Meanwhile, the commander of the US and NATO forces in Afghanistan, Gen. John Campbell, said earlier that the loyalists of the terror group are attempting to establish a regional base in Jalalabad city.

One thought on “Russia rearms Kyrgyzstan as security deteriorates in Afghanistan”