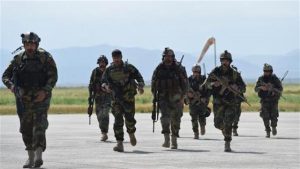 Russia is mulling to send military assistance to Afghanistan to help the country’s security forces combat with Taliban, Daesh and other militant groups.

Interfax news agency which is based in Moscow quotes Russian President’s special envoy to Afghanistan as saying that the military assistance could include helicopters.

Zamir Kabulov was quoted by Interfax as saying that the matter is being discussed at national level but Russian officials will soon talk about it with Afghan side.

“We expect that the result with be positive,” Kabulov was quoted as saying.

According to Reuters news agency, Moscow fears instability in Afghanistan could rise following the pullout of NATO troops and spill over into the ex-Soviet Central Asia, threatening Russia’s own southern borders.

2 thoughts on “Russia mulling military support to Afghanistan, including helicopters”