Russia may deploy soldiers on Tajikistan’s border with Afghanistan: CSTO 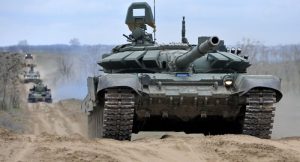 The Russian forces may return on Tajikistan’s border with Afghanistan amid fears the deteriorating security situation may affect the security of Central Asian countries, it has been reported.

A source close to the Secretary General of the Russia-led Collective Security Treaty Organisation (CSTO) has said the return of Russian forces on Afghanistan-Tajikistan border is not unlikely.

According to the Russian newspaper – kommersant, the Russian forces may return once they receive a request from the government of Tajikistan.

The source further added Tajikistan however has only requested CSTO’s technical assistance so far.

Russia is mulling the deployment of forces on Tajikistan’s border with Afghanistan amid fears that the security situation of Central Asia could deteriorate, specifically Tajikistan’s security.

Russia’s Foreign Minister Sergei Lavrov expressed concerns regarding threats posed to Tajikistan from the South due to deteriorating security situation in Afghanistan amid presence of terrorist groups and emergence of the Islamic State of Iraq and Syria (ISIS) loyalists.

According to the sources, the loyalists of ISIS terror group are looking to infiltrate Tajikistan as they are actively recruiting in Afghanistan.

The Russian forces were providing security assistance to Tajikistan’s border with Afghanistan until 2005 but the Tajik forces took control of the security afterwards.

Top Taliban officials and about 3,000 members of “religious scholars, politicians, and different...

One thought on “Russia may deploy soldiers on Tajikistan’s border with Afghanistan: CSTO”