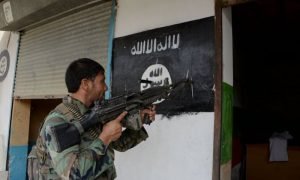 Amid concerns that the loyalists of the Islamic State of Iraq and Syria (ISIS) terrorist group are attempting to expand foothold in the country, the Russian Envoy to United Nations has emphasized a need to prevent foreign terrorist fighters from spilling into Afghanistan.

Speaking during the 47th meeting of the UN General Assembly Plenary seventy-first session, the Russian envoy, Vladimir K. Safronkov said “Taliban. Indeed, the broad use of the term “violent extremism” did not accurately reflect the situation on the ground. “We can only call these scourges what they are: terrorism.”

Pointing to a drop in drug seizures, he said Afghan-produced opium remained a serious threat, with over 40 per cent of terrorist revenue stemming from narcotics trafficking.

Expressing support for the Government’s efforts to step up anti-narcotics operations, he called on the international community to assist it in such efforts and spotlighted a joint project of the Russian Federation and the United Nations Office on Drugs and Crime (UNODC).

The Russian Federation also supported efforts towards national reconciliation and would consider supporting the relaxation of sanctions that had been imposed under the Security Council Committee established pursuant to resolution 1988 (2011).

This comes as the Afghan officials earlier said that the loyalists of the terror group are attempting to establish the Khurasan caliphate in Afghanistan, warning that the group is close to take control of Tora Bora that would help them achieve their goal.