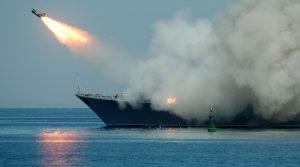 Russia claims killing over 600 Islamic State (IS) militants in one strike in Syria.

According to Russia’s RT news citing the country’s Defense Minister Sergey Shoigu, the Russian military has launched cruise missiles against Islamic State positions in Syria from both the Mediterranean and Caspian seas, one of which killed over 600 terrorists in the Deir Ex-Zor Province.

“On November 20, the warships of the Caspian Fleet launched 18 cruise missiles at seven targets in the provinces of Raqqa, Idlib and Aleppo. All targets were hit successfully,” according to RT Shoigu reported to President Vladimir Putin.

Shoigu says data on the ground shows that the flow of terrorists arriving in Syria has decreased, while more and more militants are fleeing the warzone to head north and south-west, adding that over the past four days, Russian air forces have conducted 522 sorties, deploying more than 100 cruise missiles and 1,400 tons of bombs of various types.

Russia’s Defense Minister further says that the number of aircraft taking part in the operation has been doubled, and now consists of 69 jets conducting 143 sorties on a daily basis, pointing out that the focused is to destroy the terrorists’ economic base.

Shoigu said they have targeted 15 oil storage and refinery facilities as well as 525 oil trucks.

“We stopped supplies of 60,000 tons of oil per day to the black market and terrorists are losing $1.5 million daily,” Shoigu quoted by RT as saying.

Russia still upholds its decision of not going into a ground operation against the IS in Syria.