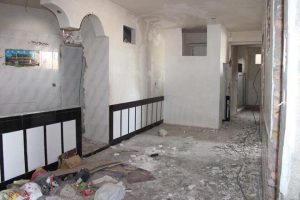 A rogue Mullah Imam destroyed some parts of the mosque in western Herat province after he was sidelined by the provincial Hajj and Religious Affairs directorate.

The local officials confirmed the incident and said the Mullah Imam was infuriated after he was removed from the mosque on the complaints of the local residents.

The provincial Hajj and Religious Affairs Director Syed Mohammad Sherzai confirmed the Imam of the mosque in Area-1 of Herat Mullah Abdul Rahman has damaged some parts of the mosque.

Shirzai further added that Mullah Rahman was removed from the mosque based on the complaints received by the area residents.

He said the Imam destroyed the second floor of the mosque claiming that it was built by his personal funds.

The local residents and social media users have widely reacted at the act of Mullah Imam with certain people claiming that the Imam has also taken away some properties of the mosque with him.