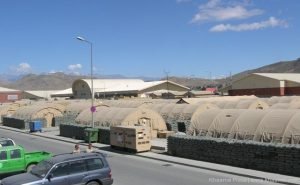 A rocket landed within the vicinity of the NATO-led International Security Assistance Force (ISAF) facility near the Kabul International Airport late Friday night.

The alliance following an online statement statement said, “We can confirm that one rocket impacted NKAIA last night, resulting in minor damage.”

The statement further added there were no ISAF casualties and the base is secured.

No group including the Taliban militants has so far claimed responsibility behind the attack.