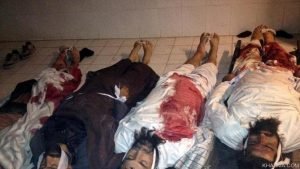 According to the local government officials, the incident took place late on Saturday in Nerkh district.

The provincial government media office, following a statement, said the rocket landed in a play ground in Omar Khel area.

Wardak is among the relatively volatile provinces in central Afghanistan where anti-government armed militant groups are actively operating.

This comes as at least 45 people were killed following a suicide attack which targeted a volleyball game in eastern Paktika province late last month.