Rocket attack on mines ministry in Kabul leaves one injured 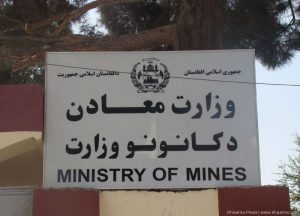 Officials in the ministry of mines of Afghanistan on Wednesday confirmed that militants launched a rocket attack on the ministry compound late Tuesday night.

A spokesman for the ministry of mines of Afghanistan, Mohammad Rafi Sediqi said the rocket hit the working office of the mines minister, Wahidullah Shahrani, injuring one person.

Mr. Sediqi further added that the the incident took place around 11 pm on Tuesday night, and the security guard of Mr.Shahrani’s office was critically injured following the attack.

He said Mr. Shahrani was not in his office when the incident took place, and it is not from which position the rocket was launched. No group has so far claimed responsibility behind the incident.

According to Mohammad Rafi Sediqi, Afghan security forces have launched an investigation in this regard, and further details regarding the incident will be released later.

He blamed the anti-government armed militant groups for the attack and said the militants are not satisfied with the recent achievements of the mines ministry to start work on some of the major mines of the country.