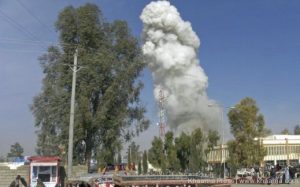 At least 17 people were killed or injured following a rocket attack in eastern Nuristan province of Afghanistan on Saturday.

According to local authorities, the incident took place late Saturday evening after a missile fired from unknown location landed in a market in Du Ab district, leaving at least seven people dead.

No group including the Taliban militants has so far claimed responsibility behind incident.

Nuristan is among the volatile provinces in easten Afghanistan which borders with the tribal regions of Pakistan. Taliban militants both from Afghanistan and neighboring Pakistan are actively operating in it’s districts, and frequently plot and carry out attacks on Afghan forces and government officials, which normally lead to civilian casualties.

This comes as United Nations earlier this month informed of 54 percent increase in violence in volatile eastern provinces of Kunar, Laghman, Nangarhar and Nuristan provinces.

The United Nations Assistance Mission in Afghanistan (UNAMA) announced that civilian casualties in Afghanistan has increased by 16 percent during the first eight months of the year.

UNAMA also added that majority of the civilians are caught in crossfire in eastern provinces of Afghanistan, as Afghan security forces have taken lead in fighting the militant groups.