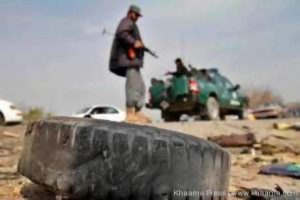 An Afghan police officer was killed and two others were injured following an improvised explosive device (IED) explosion in southern Zabul province of Afghanistan.

According to local government officials, the incident took place on Wednesday in Qalat city.

A local security official in Qalat city said the incident took place after a vehicle of the Afghan police forces struck with a roadside bomb, leaving one dead and tow others injured.

Local officials blame Taliban group for the incident, as Taliban fighters frequently use improvised explosive device (IED) as the weapon of their choice to target Afghan and coalition security forces.