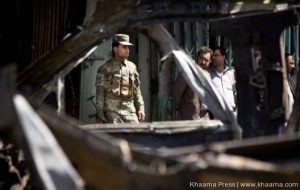 At least three civilians were killed and four others were injured following an improvised explosive device (IED) explosion in southern Helmand province of Afghanistan.

The interior ministry of Afghanistan following a statement condemned the roadside bombing by Taliban militants in strongest words.

The statement furhter added that the incident took place in Nawzad distict on around 11pm local time on Sunday.

According to the interior ministry officials, a civilian vehicle struck with the improvised explosive device (IED) which was recently planted by Taliban militants in Karez area of Nawzad district, leaving three civilians dead and four others injured.

The interior ministry called the bombing by Taliban militants against the principles of Islam and humanity.