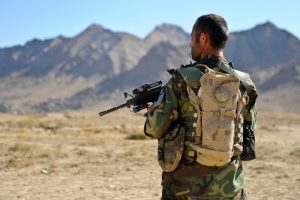 There has been a significant rise in Afghan army casualties amid rampant crackdown by the Afghan armed forces to suppress the insurgency activities of the militant groups.

At least 10 Afghan soldiers lost their lives during the counter-terrorism operations being conducted across the country amid surging violence.

The Ministry of Defense (MoD) said the soldiers were martyred in the past 24 hours as they were suppressing the anti-government armed militants.

“The Afghan National Army (ANA) forces are prepared for all kinds of devotion and with all force to maintain security and comfort for the people of Afghanistan,” a statement by MoD said, adding that 10 Afghan soldiers were martyred during counter-terrorism operations against the internal and foreign terrorists.

According to a statement by MoD at least 141 militants were killed and 23 others were wounded as a result of the clearance operations in the past 24 hours.

The statement further added that the operations were conducted in Ghazni in the southeast, Heart in the west and Nangarhar in the east.

There has been a sharp rise in the casualties of the Afghan national security forces since they took full control of the security responsibilities from the coalition forces at the start of last year.

According to the earlier estimates by security officials, the Afghan army deaths stood at 4 service members daily on average which is mainly caused due to improvised explosive device (IED) attacks.

The Afghan forces have increased counter-terrorism operations to suppress the anti-government armed militant groups who are preparing to step up attacks as they announced their spring offensive earlier last week.