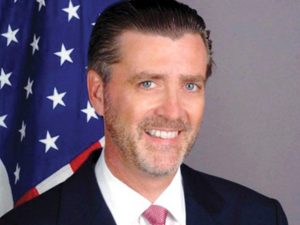 Richard Olson who is currently serving as the U.S. Ambassador to Pakistan has been appointed as the U.S. Special Representative for Afghanistan and Pakistan (SRAP), states a statement released by the State Department.

He is replacing Dan Feldman who concluded his tenure on September 18.

Thursday’s press release further states that Olson will assume his responsibilities on November 17 and will be responsible for developing and implementing U.S. policies and programs for stability and prosperity in Afghanistan and Pakistan.

“Ambassador Olson will assume his responsibilities as SRAP on November 17, after concluding his service as the U.S. Ambassador to Pakistan. As were his predecessors, Ambassador Olson will be responsible for developing and implementing policies and programs that support U.S. national security interests in promoting stability and increasing prosperity in Afghanistan and Pakistan.”

Olson brings extraordinary experience in Afghanistan and Pakistan to his new position.

Prior to his three years of service as the U.S. Ambassador to Pakistan, Olson served as the Coordinating Director for Development and Economic Affairs at U.S. Embassy Kabul, Afghanistan, from 2011 to 2012, during which time he oversaw all U.S. non-military assistance programs and support for the Afghan government.