Return of Bamyan Buddhas with help of 3D image display 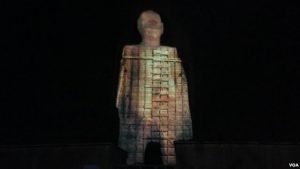 The historic Bamyan Buddhas made a return for the first time with the help of 3D image display which was projected in the empty place of the original Buddha that was destroyed by Taliban militants.

The device through which the 3D image could be displayed, has been invented by a Chinese couple and was gifted to Afghan people as a gift from the people of China, according to a report by Voice of America (VOA) TV Ashna.

The couple – Janson Yu and Liyan Hu said the projector was built with a cost of over $120,000.

According to reports, a similar plan was recommended to the Ministry of Information and Culture of Afghanistan around ten years ago but the plan was not implemented.

The Bamiyan Buddhas were destroyed after the Taliban militants group blew up the world’s two largest standing Buddhas – one of them 165ft high, earlier in 2001.

Among the Afghanistan’s historical remains, Taliban’s biggest targets, literally and figuratively, were the two monumental Buddha statues carved out of the sandstone cliffs in central Afghanistan. The destruction work concluded in almost three weeks period which sparked global objection.

One stood nearly 180 feet tall and the other about 120 feet high and together they had watched over the dusty Bamyan Valley since the sixth century, several centuries before Islam reached the region.

The Buddhas of Bamyan were two 6th century monumental statues of standing buddhas carved into the side of a cliff in the Bamyan valley in the Hazarajat region of central Afghanistan, situated 230 km (143 miles) northwest of Kabul at an altitude of 2,500 meters (8,202 ft). Built in 507 A.D, the larger in 554 CE, the statues represented the classic blended style of Gandhara art.