“NRF” leaders may meet with Taliban in Moscow

Taliban meet representatives of eight countries including US in Oslo

High schools for girls to reopen in March, IEA has no issue with girls’ education:  Education Ministry 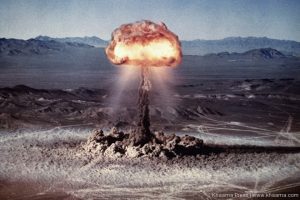 The US researchers have for the first revealed the consequences and effects of nuclear conflict on earth by using the computer models.

The effect of the nuclear conflict will lead to worldwide famine, deadly frosts and global ozone losses up to 50 percent , the researchers have said.

The outcome of a limited and regional nuclear war between India and Pakistan has been looked at by the researchers.

Researchers have said that five megatons of black carbon would be released into the atmosphere if 100 nuclear weapons would be detonated that would block out the sun and would be fatal to humans.

The researchers have said that the nuclear conflict would affect the temperature of the earth which would be beging to drop, there would be ozone losses which would increase UV rays in some locations by as much as 80 per cent.

Increase in UV rays which increase the chance of developing skin cancer for large swathes of humanity, the researchers have said, adding that the conflict would also affect the rainfall by 9 percent.

The researchers have warned that global cooling would put significant pressures on global food supplies and could trigger a global nuclear famine that would lead to death of hundreds of millions and even billions.